A tale of a blacksmith

Once upon a time there was this blacksmith called Will Turner, he lived in shabby house in Port Royal in the Caribbean. He rarely experienced anything, all he did was make these beautiful swords and practice with them. Eventually he became quite good, but unfortunately never good enough to join the army. Joining the army was his big dream, he’d always wanted one of those tight red suits, but alas this dream didn’t look realistic at all…

He slaved all day long for a lousy fee, he was poor and would be forever as it would seem. He often wondered if his life would ever change, or if he was doomed to live this existence forever. Love wasn’t a word in his vocabulary, he had never experienced it on his own body. He longed for the governor’s daughter and found he very beautiful, but he was no shallow man so he knew this wasn’t love. The curiosity regarding love was growing in his body, and he knew he needed it in his life. He was twenty-eight and a virgin, sure he lived in a time where you didn’t have sex before marriage, but he also lived in a time where many didn’t live to turn forty, so he was slowly becoming rather anxious to come out of his shell.

He tried to summon all of his strength and ask Elizabeth, the governor’s daughter out to dinner, but every time he tried to walk up to her home, his knees started to feel like gelly and his belly got filled with butterflies, was this love? Or was it just anxiety. After a month of soul-searching trying to find the power within to ask this young maiden out, he finally filled with determination walked up too her door, full of confidence and looking more handsome than ever.

He stood in front of the door, his heart was racing and his mind felt foggy. His arms where shaking as he tried to knock on the huge oak-tree door, his muscles failed him and his arm felt like a dead snake. As he scolded on himself, he took a deep breath and his body got filled with hot air and then he knocked so hard on the door that he was surprised by his own strength.

He heard elegant footsteps on the other side, and when the door slowly opened he saw her, she looked more radiant than ever. Her long brown hair was laying on her bare shoulders, and her brown eyes was glowing. She figuratively took his breath away, he stood there unable to say a word wondering, was this love?

He asked her to go for a walk, a little bit more mellow than his first plan, but he just wanted to be with her now.. She accepted his invitations with a big smile, and joined him with her arm on his. As they walked Elizabeth talked about corsets, dresses and her problems regarding her long hair. At first Will listened but as time went by he started wondering why he had idolized this woman. She was shallow and boring, not at all what he had hoped for. After a long walk, he said goodbye to her at her front step, promising to come visit her the next day. As he walked away he knew that he wouldn’t and that it definitely wasn’t love at all…

He went home and felt rather sad about his loss of what could have been love. This was a girl he had dreamed about for years, and she wasn’t at all what he had thought. Depressed and on the edge of tears he sat down by his donkey, and hugged him tighter than ever. He felt a calm filling up his body and asked himself was this love? Well, probably not he was pretty sure he still liked girls.

The following day as he returned from the market, he found that somebody had broken into his blacksmith. He felt a knot in his throat, who would break into a blacksmith, he had very little of value. He saw the dragging footprints in the dust and his heart beatet so heart, he feared it would jump out of his chest. All of a sudden he hears a loud thumb and in front of him rises a tall, dark-haired, tanned pirate. He has long hair, and wears eye-liner, Will can’t move he’s filled with fear and another unidentified feeling.

The handsome pirate tells him to get out-of-the-way, and let him pass. But Will is a good citizen and piracy is a crime, so he stands brave between the door and the shabby looking pirate. Amused by his bravery the pirate introduces himself as Captain Jack Sparrow.

As Jack looks him deep in his eyes, Will’s body heats over.. He’s scared and his stomach hurts more than it ever had before. His heart beatet so hard, and he could barely stand. His entire body was falling apart, and he felt a tug in his pants, what was happening?

Jack could see how Will was struggling, he found it hilarious to see how his body fought his mind. Jack slowly moved closer, still looking into his eyes. He could see goosebumps spreading on his revealed chest. Jack touched his hips and slowly pushed his body into his. Will grabbed Jacks ass, and kissed him passionately.. 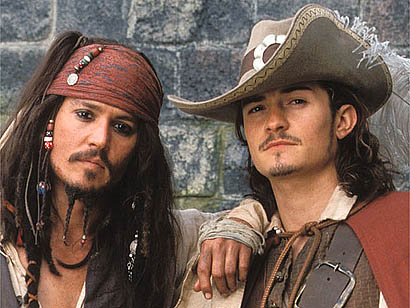 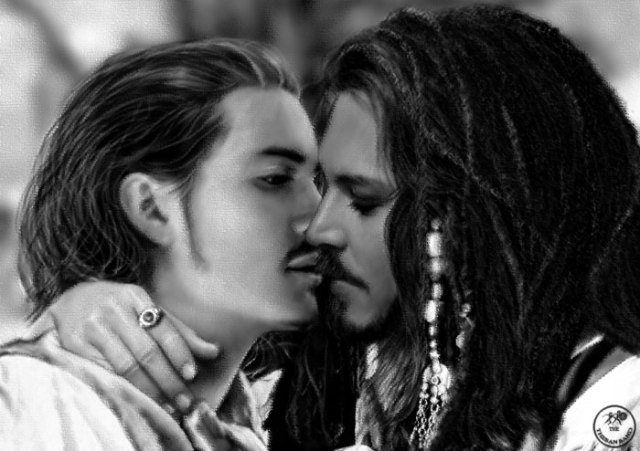 You really thought I was done?? Of course not…

Will put his hands on Jack’s cheeks and kissed his soft lips softly. Jack’s hands moved to Will’s hips, and on to the lower part of his back, then he forcefully pressed Will against his body. He could hear Will moan in his ear, which made his blood float south. Will started kissing Jack’s collarbone, and moved his hands down the back of his pants.

Jack grabbed Will hard and turned him around, then started kissing Will’s neck softly. Will couldn’t believe this was happening, his mind was totally blank and his body was completely in Jack’s custody. Jack pulled Will’s pants down and a pale, but firm bum revealed itself. He could feel the excitement fill up his body, he ripped of his own pants and entered his stiff penis in Will’s tight rectum.

They fucked all night long, it was patiently and tough but in a good way.. Not to worry Jack didn’t break Will 😉

The next morning Will woke up, happy, satisfied and well let’s face it a bit sore. He couldn’t wait to look into Jacks big brown eyes again and touch his firm body. But as he turned there was no one to be found, nothing but dust and the donkey. At first he felt humiliated and used but after having thought things through he said to himself: “What the hell, I just had sex with Jack Sparrow, no make that Captain Jack Sparrow!”

Hi, I'm the only true IceQueen left in the world.. I have passed the exams, and now I'm in control of snow and ice all over the world... It's pretty fucking awesome....
View all posts by theevilicequeen →
This entry was posted in In lust we trust and tagged Gay pirates, Jack Sparrow, Piracy, Pirates, Pirates of the Caribbean, Port Royal, Will Turner. Bookmark the permalink.

16 Responses to A tale of a blacksmith